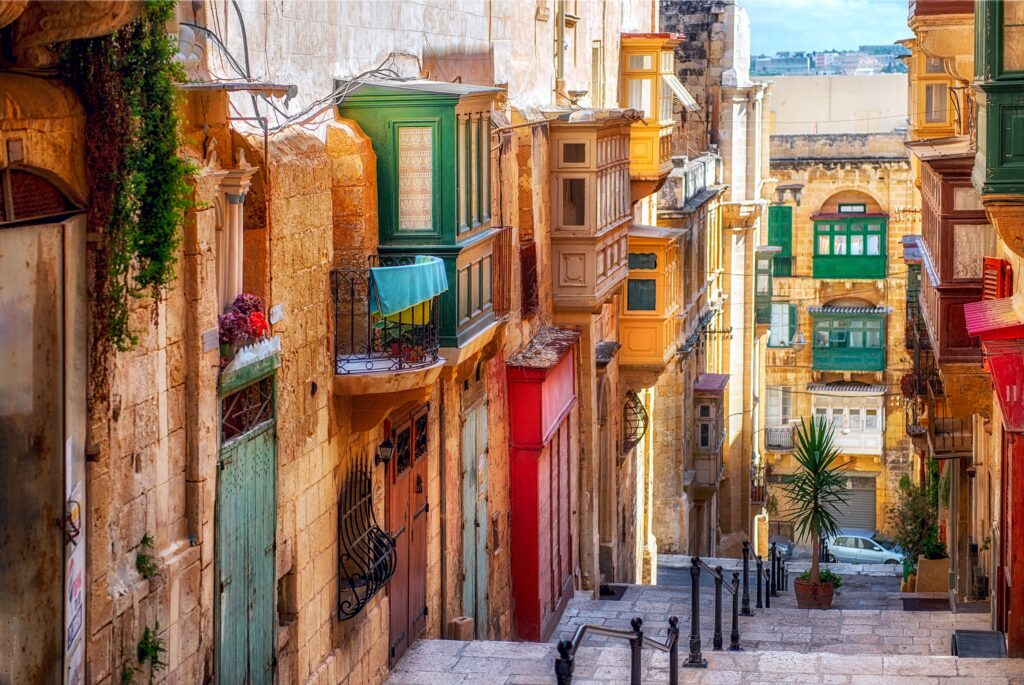 Less than 200 miles off the coast of North Africa, and a mere 58 miles south of Sicily, lies majestic Malta–one of the smallest countries in the world.

From a bevy of beaches and stunning scenery to walled cities and ancient archaeological sites to luxury hotels world class spas, Malta has an array of unique experiences for the curious luxury traveler. Boasting 3 UNESCO world heritage sites, baroque churches and palaces dot ancient villages and towns in Malta, and some of the oldest structures in the world adorn Malta’s countryside.

Malta consists of 3 islands: Malta, Comino and Gozo. In addition to it’s ancient sites and world renowned diving, Malta is known for its nightlife.

From golfing, sailing and diving to relaxing on large sandy beaches or small quaint beaches, your Enlighten Excursions Travel Consultant can help you plan your Malta adventure from beginning to end.

Known locally as Ghawdex, Gozo is a small island 20 minutes away from Malta by ferry. Known for its rolling hills, quaint villages, and natural sights, Gozo is a can’t-miss serene getaway.

Xewkija is the oldest village in Gozo, and is famous for its church; The Rotunda of Xewkija. Built from Maltese limestone and decorated inside with fine sculpture and artwork, this is one of Gozo’s most popular attractions.

Overlooking the gorgeous sandy beach of Ramla Bay is Calypso Cave, the cave widely thought to be the same cave mentioned in Homer’s “The Odyessy.” Visitors here can go into the cave and see sweeping views of the beach below.

Dwejra, meaning “small house” in Maltese, is an area on the west coast of Gozo. It gets its name from a small house built on the cliffs surrounding the inland sea. Here, visitors can see the Azure window, a famous natural arch.

This fortified historical city once served as Malta’s capital city. Today, the town remains within its original fortifications and has a population of around 300, but it is contiguous with the town of Rabat.

Travelers can explore the town’s medieval twisting streets, courtyards, and palaces that make it feel as if you’ve stepped back in time.

The bastions and ramparts of the Mdina Citadel provide excellent viewpoints to see the city surrounding the village as well as the village within the ramparts. Visitors can take a walking tour to see and learn about the history of the area or explore independently.

The Cathedral of Saint Paul and accompanying Cathedral Museum can’t be missed while visiting Mdina. This spacious Baroque cathedral has gilded decorations, detailed architecture, and precious art inside. In the fomer seminary of the cathedral is the Cathedral Museum, where visitors can see sacred art, Roman antiquities, and masterpieces of European painting.

Located in the southeastern region of the main island of Malta, Valletta is the capital of the nation. Packed with historical sights and monuments, the city has been a UNESCO World Heritage Site since 1980. This is a city filled with history that has all the amenities of a big city with all the charm of a quaint Mediterranean village.

St. John’s Co-Cathedral was built in the 16th century as a symbol of the success of the Knights of Malta’s successes. Built and decorated in Baroque style, the cathedral features stunning architecture, gilded walls, fine sculpture, and gorgeous paintings.

The Valletta Grand Harbor, one of the largest marinas in the world is a great starting point to set sail for a day filled with stunning sights and interesting history or to stay on shore and take in the views.

Valletta has well-preserved fortifications dating as far back as 1552 surrounding the city. The city was once known as one of the best-fortified cities in the world, and these structures remain largely intact to this day. The Upper Barrakka gardens, which encircle part of the old fortifications are a peaceful way to take in views of the old city and its fortifications.

Valletta has earned the title of the “European Capital of Culture.”With a year-round schedule of arts and cultural events, there is always something to experience in Valletta. During the summer, the Malta International Arts festival draws talent from all over the world to perform at venues around Valletta.